3 Types of Vacuum Pumps and their applications 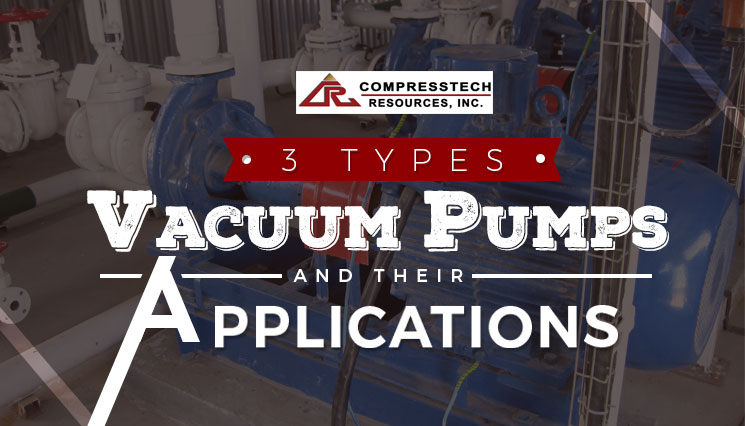 A vacuum pump is a device that removes air, gas or vapor from a confined space, sealing a void inside. This equipment has long been credited to many inventions that came into existence, and applications in various industries – from pharmaceutical, sewerage to automotive and a lot more.

However, while a vacuum pump basically has a common function, it actually has a number of types, with each varying in design, requirements, and applications.

In this infographic, Compresstech Resources, Inc. highlighted three common types of vacuum pumps according to their techniques. But first, we gathered some information that we think is best for you to know:

The Invention of Vacuum Pumps

Although the history of vacuum technology can be traced back to ancient Greece — with ancient philosophers such as Democritus proposed the existence of vacuum – it was only during the 1650s when the first vacuum pump was conceived.

About 1650: Otto von Guericke invented the first vacuum, whose parts were kept airtight by water – an idea used to this day, only that water is replaced with oil.

1705: Francis Hauksbee produced an improved version of two-cylinder pump that remained a pattern of cylinder vacuum pumps until the end of the 19th century.

1905: Wolfgang Gaede invented a speedier version of a rotary mercury pump introduced during the same year.

1915: Gaede also brought in the last inventive steps in the vacuum pump technology wherein he created the equipment based on new principles. This resulted in the wide use of vacuum to this day.

21st Century: Today, the use of vacuum pumps spans in various industries and its applications are as varied as the processes of using vacuums.

Types of Vacuum Pumps by their Techniques

When it comes to situations requiring low vacuums, a positive displacement pump proves to be the most efficient. This equipment operates by using a mechanism that repeatedly expands a cavity to allow gases to flow out from the container and release them into the environment.

This equipment is further divided into a number of types, but the two most common tool used for industrial applications are:

Advantage: It is considered an economical option that only requires minimal power.

Advantage: Versatile and can be used in a wealth of applications.

In conjunction with one or two positive displacement pumps, a momentum transfer pump is the most viable tool for achieving high vacuums. Otherwise known as molecular pumps, this equipment works by employing high-speed jets of dense fluids to accelerate gas molecules from the container to the exhaust side.

The two main types of molecular pumps are:

Advantage: It provides high reliability at a low cost.

Finally, for applications that require ultra-high vacuums, an entrapment pump would be your best bet. This pump uses cold temperatures to condense gas molecules to a solid or absorbed state. These molecules then create a thin film which is then removed by the entrapment pump. This tool is known to be the most effective since it’s usually placed directly into the container.

Advantage: It operates at high-pumping speeds

Advantage: It can reach pressures that are as low as 10−11 mbar under ideal conditions.

Compresstech is a reputable compressed air product and service provider in the Philippines. We take pride in being a direct distributor of the best vacuum pump brands in the country, providing services to every industry imaginable.

Contact us and let us help you find the best vacuum pumps for your needs!